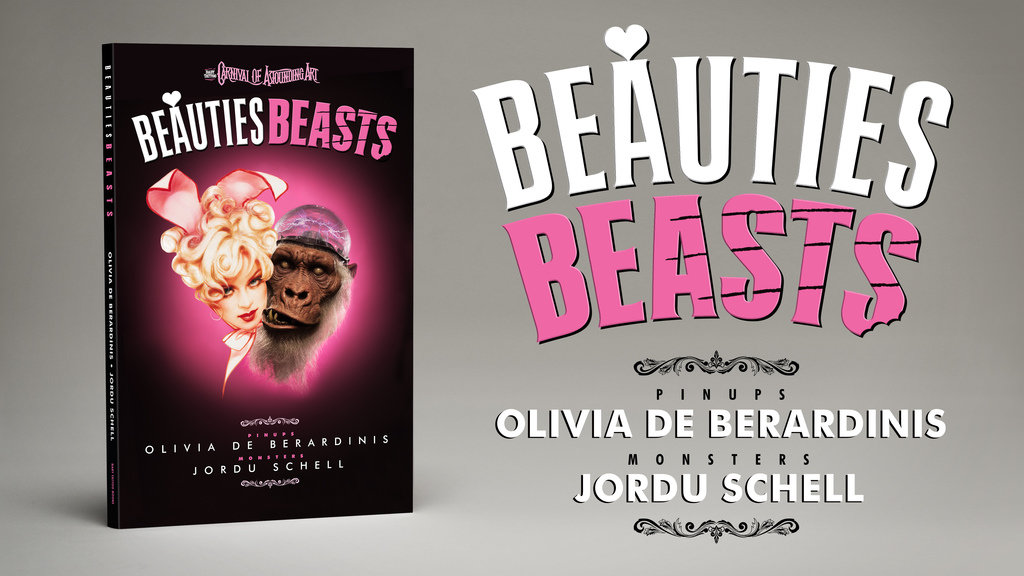 Latest Updates from Our Project:

If you like what you see, click here (or on the images) to get in on the action.

We hope you're all having a beautiful year, and here's to a spectacular 2019!

One, “When Is High Moon?” is a graphic novel anthology created by moonlighting artists from the story and visual development departments at Walt Disney Animation Studios. Featuring work by John Musker, Brian Kesinger, Brittney Lee, and more, this passion project reflects on the question "When Is High Moon?".

The second project launch of the day is a lavishly produced re-release of Brandi Milne's sold-out children's book “So Good For Little Bunnies”. This special 10th Anniversary Edition will feature a reimagined cover and uses Brandi’s distinct artistic flair to tell a tale of youthful exuberance.

We hope you’ll take a look!

A beauties vs. beasts rivalry has been blowing up on Kickstarter!

About a month ago, Baby Tattoo launched a campaign for Brian Kesinger's Inked Tails and Penned Dragons books. No favoritism was in play... anyone who backed our Beauties Beasts book should be able to attest that we are a species-blind publisher likely to appreciate mermaids and dragons with equal enthusiasm!

Well, apparently dragons and mermaids do not subscribe to a "let's just all get along" philosophy because they have been competitively hacking into our account and commandeering the project with self-serving propaganda.

And just like that, we find ourselves on the tail end (mermaid/dragon pun intended) of a tumultuous yet rewarding Kickstarter project involving one book of beauties and a companion book of beasts. We hope you will consider pledging for one or both of the books in either standard or limited edition bindings. And if you have mermaid or dragon loving friends or family, please direct them to MermaidsAreGreat.com or DragonsAreAwesome.com depending on which way they roll.

Thanks again for being part of Baby Tattoo's (slightly discunctional-in-a-good-way) family!

Photographer and frequent Baby Tattoo Kickstarter collaborator Allan Amato (who created the Kong-inspired Beauties Beasts image pictured above) has conjured up something new (and nude!)...

SERAPH is a photography book exploring the strength and empowerment intrinsic to being nude. It is the sequel to Allan's previous project SLIP (also published by Baby Tattoo) with a bevy of incredible new subjects like Stoya, Amanda Palmer and Erika Moen. If you're a fan of beautifully realized nude photography, please take a look by clicking here.

We're rapidly approaching the one-year anniversary of the Beauties Beasts Kickstarter campaign (we launched at the start of San Diego Comic-Con 2016). It's been a wonderful journey. Bob Self and the Baby Tattoo team would like to once again express gratitude to everyone who made our pinup and monster fueled dream a reality.

Olivia recently launched her very own Kickstarter campaign for The Art of Olivia: 2018 Wall Calendar. Do the sexy, sexy thing and become a backer!

Featuring Bettie Page, the Queen of Cheesecake, in a variety of sexy poses and costumes, and amply supported by phenomenally rendered models and performers such as Dita Von Teese, Masuimi Max, Heather Kozar, Bridget Marquardt, Tiffany Fallon, and Tiah Eckhardt.

In the modern digital age of instant information, the printed wall calendar has largely become an anachronism; discarded as an obsolete relic alongside cameras, clocks and calculators. Over the last 20 years, most of the standard distribution venues calendar-creators have relied upon have simply disappeared. And that’s why Olivia is bringing this project to the Kickstarter community. She hopes fans will agree that the wall-art calendar has not lost its allure, and that there will always be a need for quality pinup art every month of the year – delivered with a modern twist, as only Olivia can concoct.

Help support the continuing legacy of timeless calendar pinups made popular by such as artists as George Petty, Gil Elvgren and Alberto Vargas. Indulge in a taste of sophisticated glamour – guaranteed to raise a smile for 365 days a year.

The Art of Olivia: 2018 Wall Calendar features 28 pages of full-color artwork – designed by Olivia to include a useful roster of memorable dates and holidays (with four overspill months, so one can start using the calendar as early as September 2017). The final printed product will arrive by August, poly-bagged, folded and stapled at a size of 12” x 12” – opening out to 12” x 24”– for an eye-pleasing wall display.

ABOUT THE ARTIST: Olivia De Berardinis is the ‘High Priestess of Pinup’. For over 40 years, she has helped redefine notions of female sexuality and eroticism, through galleries and musueums around the world, and publication in leading men’s magazines, books, advertisements, and film posters.

Beyond breaking cultural taboos, Olivia has created some startling images of the contemporary outré-hip along the way; Dita Von Teese, Margaret Cho, Pamela Anderson, and Masuimi Max are a just few of the strong women that have collaborated in making femininity an image of one’s own choosing. Olivia’s interpretations of Bettie Page though, are perhaps her most iconic – the painter and airbrush artist has been a key figurehead of the Bettie Page revival phenomena since the mid-1970s.

Whether ethereal, punk-edged fantasies or super-realistic imaginations, Olivia’s pinups have inspired a generation – with tens of thousands across the globe wearing her art tattooed, making it their desktop screensaver, getting it framed, or hanging a calendar on their wall.